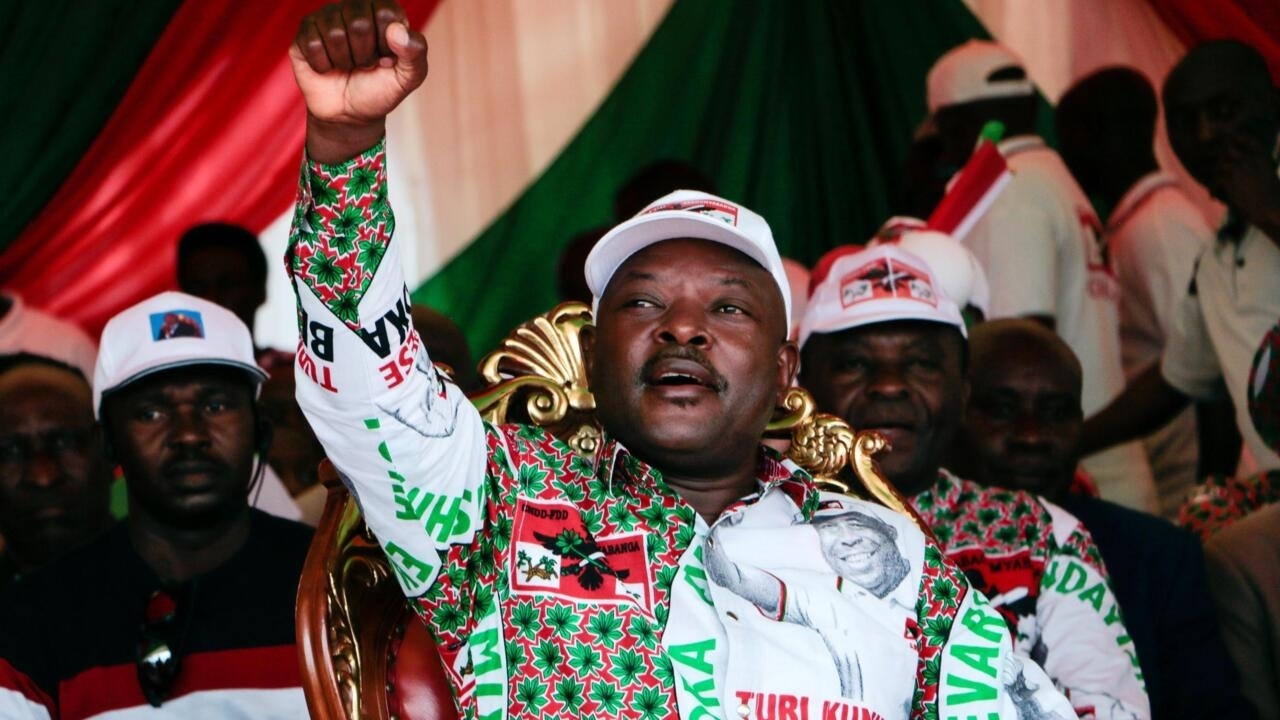 The sudden death of President Pierre Nkurunziza on Monday has plunged the country into a state of shock and left Burundians wondering what the future holds after 15 tumultuous years under a man convinced he was destined to lead the East African nation.

As news broke of Pierre Nkurunziza’s death, residents of Burundi’s biggest city, Bujumbura, could be seen rushing home to hear the announcement, and businesses closed early.

On social media, tributes flooded in to honour the outgoing incumbent.

Burundi resident Léopold Bankuwunguka tweeted: "RIP my President. We will never forget your patriotism, your leadership."

Fifty-five-year-old Nkurunziza died on Monday of a heart attack, according to an official statement.

His death came as a shock and surprise to many – after being seen in public on Saturday, seemingly healthy, watching a game of volleyball in the countryside.

The office of Kenyan President Uhuru Kenyatta described Nkurunziza's death as a blow to the region, saying on Twitter that it "robbed East Africa of a prominent leader...an outstanding regional counterpart who served his country with distinction".

Similar comments were expressed in Nigeria, where President Muhammadu Buhari spoke of his "profound grief and sadness".

Flags flew at half-mast on Tuesday as the government declared seven days of national mourning.

Nkurunziza, the self-appointed "Supreme Eternal Guide" was due to step down in August after 15 years in power. His path to leadership had been a rocky one.

Born into a wealthy family in 1964, was orphaned at 8 after losing his father, a civil servant, in a string of ethnic massacres.

In 1995, he joined the Hutu rebellion, finding in religion a solace from the country's civil war.

He almost died at one stage after badly wounding his leg and spent four months hiding out in remote swamps. That is where "God appeared to him" and announced he would one day be president, he later claimed.

"Nkurunziza indeed believes he is president by divine will," presidential spokesman Willy Nyamitwe once said.

That vision became a reality in 2005 when the former rebel took office becoming the first parliamentary-elected leader from the Arusha agreement, enshrining a balance of power between Hutus and Tutsis.

He was the "symbol of a united Burundi", that reconciled at the end of the civil war, ex-president and opposition leader Pierre Buyoya, told RFI.

A few relatively peaceful years followed after his election.

Nkurunziza's supporters praised him for the construction of more than 5,000 schools, roads and 10 sports stadiums around the country.

As well as being a fervent Christian, Nkurunziza was also a lifelong fitness and football enthusiast.

"In the beginning, he embodied a lot of hope," comments Pacifique Nininahazwe, head of civil society organisation Focode.

"He talked about democracy, fighting corruption. But disillusion rapidly kicked in," he told RFI.

Reports began to emerge during his second mandate of a crackdown on opposition and media outlets. They would intensify in 2015 when Nkurunziza's controversial run for a third term set off a wave of violence.

Since his 2015 re-election, "the entirety of the political, administrative, judicial and security system has fallen under the stranglehold of the president's clan", the international federation of human rights said in 2018.

The final years of Nkurunziza's life saw Burundi become increasingly isolated. Last year, he shut down a local United Nations office which was probing killings, enforced disappearances and other rights abuses in the country, which the government has always denied.

More recently Burundi expelled staffers from the World Health Organization, accusing it of interference in its handling of the coronavirus pandemic.

Nkurunziza claimed less than two weeks ago that Burundi was saved from the virus due to "the hand of God" and told the public to ignore social distancing measures and shun masks.

However, last month his wife Denise was flown to Kenya after contracting Covid-19. In Burundi and beyond, questions are being asked about whether Nkurunziza became the first president to die of the disease, even if the official version states he died of heart failure.

His death comes on the heels of elections on 20 May that saw former army general Evariste Ndayishimiye, who was handpicked by the ruling party, replace him.

Ndayishimiye was due to take office in August.

To avoid a power vacuum, the head of the National Assembly Pascal Nyabenda will now assure the interim period.

Nkurunziza, appointed the "supreme guide for patriotism" in February had been expected to continue to play a key role in Burundian politics after stepping down as president.

Some critics have expressed their regret that he will not be able to answer for the alleged crimes committed during his third mandate.

For analyst Oneshore Sematumba from the International Crisis Group, the fallout from the end of Nkurunziza's reign will weigh heavily on incoming president Ndayishimiye.

"The consequences of Nkurunziza's actions during his third mandate," which violated the Arusha accords that ended the civil war, will be by far Ndayishimiye's biggest challenge," he told RFI.